A lot has been written about sugar and it has been largely blamed for the obesity epidemic and a few other common illnesses. But, as always when discussing a topic like this we need to apply context. Context is important because it shows perspective and relevance, something that is hugely important when it comes to nutrition.

Sugar is a short chain carbohydrate, it tastes sweet and adds palatability to foods. Some foods have naturally occurring sugars in them and some, usually, processed foods, have sugar added to them. A good example of a food that is reasonably high in natural sugar is citrus fruit. While an example of a food with added sugar could be blackcurrant cordial.
But, this is where the context comes in. Sugar in itself isn’t bad, especially when you realise that all carbohydrates, whether it’s a sweet potato, a banana or a teaspoon of castor sugar is converted into the storage form of carbohydrate called glycogen. In fact, a lot of the food you eat gets turned into glycogen, including proteins and fats. So, you see, sugar isn’t bad per se.

When we talk about carbs we generally tend to label them as simple carbs (sugar) or complex carbs (starch) the complex carbs take longer to be converted into glycogen. This is worth knowing if you have diabetes or insulin resistance(IR). According to The Gale Encyclopedia of Medicine cases of diagnosed IR in Canada and the USA affect 3-16% of the population depending on which source you go with. That’s pretty low which means that you are highly likely NOT to have IR. Even if you did the most effective ways to treat this condition are to do regular exercise and be in an energy deficit.
Because ‘simple’ sugars act quickly they are a great way of delivering quick energy to your muscles which is why it is recommended that you supplement high volume exercise by effectively drip feeding carbohydrates, often in the form of gels, sweets or liquids. Ever taken part in an organised run and been given jelly beans at a feed station? That’s why, you need those fast release sugars to keep your legs moving.

Sugar is only a problem if you consume too much and that is a very real risk if you consume a lot of processed foods because they often have sugar added, even in foods that you wouldn’t expect like bread or pickles.

Let’s go back to the blackcurrant cordial. A typical serving of cordial contains about 20 g of sugar. If you drink 4 of those per day that’s as much as 80g of sugar which is 320kcal that I bet you haven’t put into your calorie tracker. Now you can see why this might be a problem, especially if you aren’t being active.
Compare this with a banana, which is a high carb fruit and one that we are often warned contributes to obesity and we can see that a typical medium sized banana contains about 25g of carbohydrate, 2-3g of that is starch, 1-2g of that is fibre and the rest is sugar, that’s about 100kcal. This changes depending on how ripe the banana is, the greener it is much of the starch and fibre has not yet turned to sugar. But even a ripe banana still contains plenty of vitamins and minerals as well so you shouldn’t be avoiding these simply because some ‘paleo mom’ said they are bad because of sugar. If you are overweight a banana is the least of your worries.

Delving further into the context of sugar in the diet, here are some statistics on diabetes prevalence from Diabetes UK.

The International Diabetes Federation (IDF) estimates that in 2010 the five countries with the largest numbers of people with diabetes are India, China, the United States, Russia and Brazil.

It is estimated that up to one in 20 people in England has diabetes (diagnosed and undiagnosed). UK-wide, it is not quite one in 20.

In 2009, the prevalence of diabetes in the adult population across the UK was as follows:

As you can see, diabetes is a serious issue and one that is rising, partly due to better diagnosis but also due to increasingly sedentary lifestyles and poor diet. However, seeing as the rate of prevalence is low it’s safe to say that the vast majority of people reading this don’t have diabetes.

The glycemic index (GI) measures the response that a food has on insulin. 2-hours after consumption the amount of sugar in the blood stream is measured. The glycemic effect of foods depends on factors such as the type of starch, fat and protein content of the food and organic acids or their salts in the meal. GI only measures total carbohydrates minus fibre. 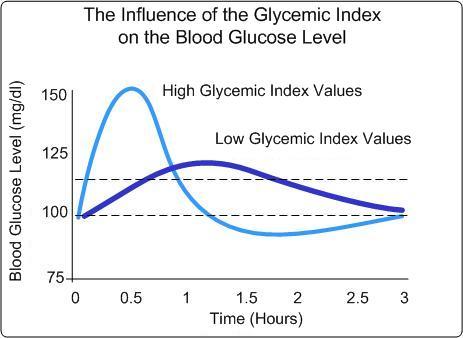 The image here shows the effect that high versus low GI foods have on your blood sugars, so if you have IR or diabetes it’s important to understand how to control this. If you are otherwise healthy, it’s not such a big deal so long as you keep up your activity levels and are eating a well-balanced diet.

The image below shows different types of foods and the GI category they fall into. As a general rule you would eat moderate to low GI foods for the most part and only consume high GI foods when you need instant energy. 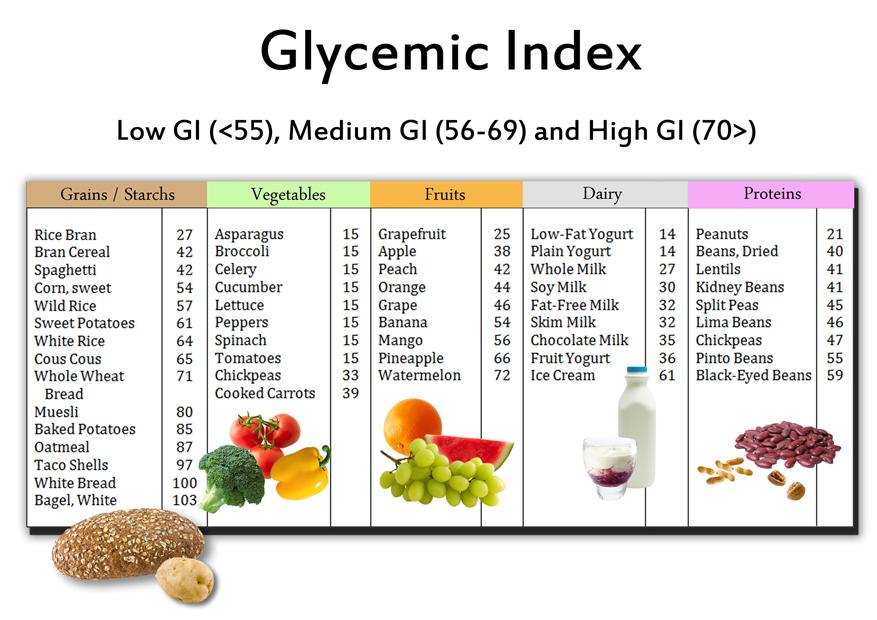 This is where things get interesting because, as we said, the GI index only measures the available carbohydrates in a food, the slow and steady release of glucose in low GI foods. But, this is only part of the story and a more telling measurement is known as Glycaemic Load (GL), which measures the TOTAL carbohydrates in a given food. In short, you don’t just need to know how quickly glucose is released but how MUCH glucose is released when you eat that food and this is very important for bringing things into perspective.

This means that a food which is comparatively high in sugar, like say a banana but that also contains starch and fibre might not be as fast releasing as we think, we also need to take into account the size of the serving. Better still, foods that are high in protein and fibre will dampen the GI effect. This also applies to complete meals, so you may have a high GI food on your plate like, say, white bread, but you also have a high protein food like some steak and some high fibre foods like green beans and suddenly you have a meal with a moderate GL that delivers a moderate amount of glucose at a moderate pace and not fast enough for it to be especially problematic to anyone with insulin resistance. This is all especially intriguing when you take into account that ALL foods, even high protein foods, elicit an insulin response because it’s insulin’s job to help deliver nutrients to the muscles.

The table below, taken from the Harvard University website shows the GI and GL ratings of common foods. Obviously, it’s an American university so they use USA values but you get the picture

Let’s sum it all up. Too much sugar is a bad thing for anyone, no one is trying to say otherwise. But, how much is too much depends on your health, body composition, activity and numerous other activities.

If you are eating healthy balanced meals like those we have listed on our site you probably aren’t consuming too much sugar. Even if you have a day of indulgence and eat or drink some high sugar foods this isn’t going to instantly make you ill and it will only cause weight gain if you are in an energy surplus for the week. Remember, fat loss Will occur if you are in an energy deficit regardless of the food you eat, it’s just easier when you are eating healthily.

Unless you have been diagnosed with diabetes or IR then you don’t really need to worry too much about high GI foods, especially if you, are in an energy deficit and exercising a few times per week.

A quick note on activity, exercise is proven to improve insulin sensitivity and resistance training is one of the best forms of exercise for doing so. As always, exercise is for health and fitness, while diet and nutrition is where your fat loss comes from.